You can also tune the intensity of the Post Effect with the Alpha slider in the Inspector panel.

Tip Make sure your Color Correction Post Effect object is listed below everything you want to colorize in the Objects panel.

Lens Studio includes a number of built-in Color Correction textures if you are unable to create your own. They can be added to your project in the Objects panel by selecting + -> Color Correction.

To make your own custom Color Correction Post Effect, download the below base lookup table. You'll be making your modifications to this image.

You can also get this texture by going to the Resources Panel -> + -> Color Correction Texture -> Empty.

Open the base lookup table image in Photoshop or a similar image editing tool. You'll be making your adjustments to this lookup image. Add a reference photo as a layer above the lookup layer. Then, add adjustment layers above both the reference and the lookup. In the example below, we've added simple Hue/Saturation and Color Balance adjustment layers to give the Lenses a pink tone.

Use your reference layer and the added adjustment layers to tune your effect. 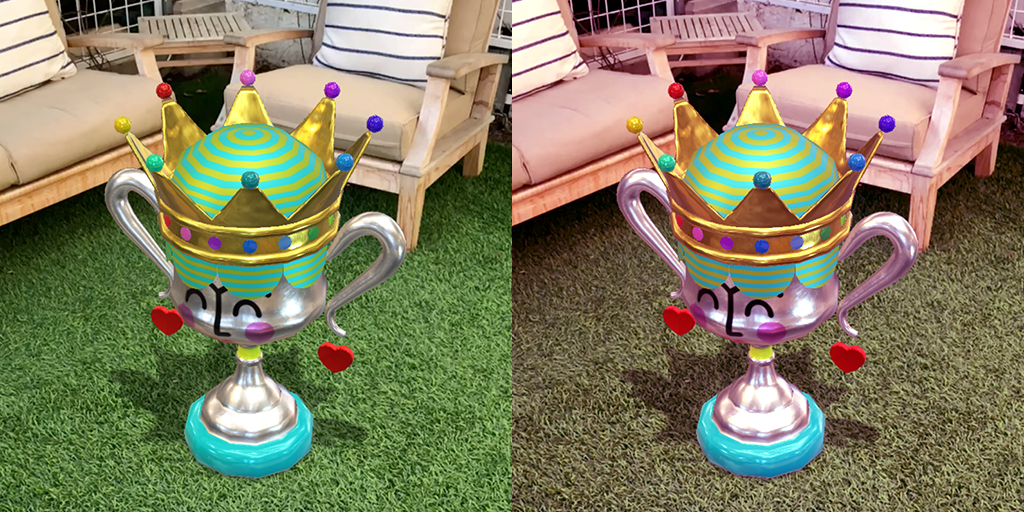 Before export, hide the reference layer. Your adjustment layers will apply to the still visible image lookup table.

Export the lookup image with your newly added adjustments as a PNG.

Warning
The Color Correction Post Effect object only supports a non-compressed PNG. Compressing the PNG or using a JPG will result in noticeable artifacts.

Post Effects have various parameters that you can adjust in the Inspector panel. First, find the corresponding material for the added Post Effect in the Resources panel.

With the corresponding material selected in the Resources panel, you're able to adjust its settings in the Inspector panel.

Below are the available Post Effect types outside of Color Correction and their available tunable params. All this materials are Graph Post Effect Materials. You can double click on each of them in the Resources panel and see what's under the hood. 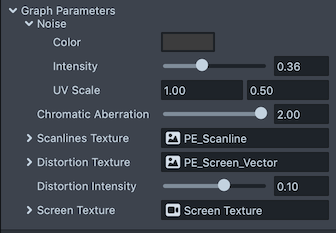 Adjust the colors in the camera to a gradient defined by four colors. 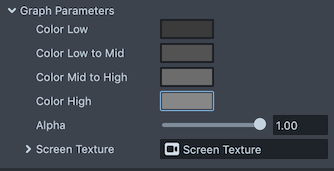 Re-maps the colors in the camera with four separate color mixer colors.

Distorts the camera with a tunable distortion texture. 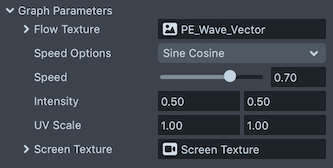 Dithers the screen, either in Color or Greyscale, with a tunable dithering size. 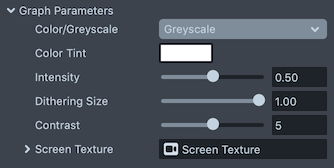 Finds edges in the camera and colors them with a tunable outline color.

Creates a painterly effect applied to the camera with a tunable intensity.

Pixelates the screen and allows you to tune the effect's pixel size.

Creates a blur centered on a point of the screen.

Shakes the screen with a tunable horizontal and vertical intensity.

Creates a VHS like effect with an animated band.

Removes hi-frequency artifacts from the screen

Adds a gaussian blur effect to the screen