This page list out Sub-Graph Library presets in alphabetical order. You can find these sub-graphs under Sub-Graph Library section of the Add Node menu. You can open this menu by hitting tab on your keyboard while in the Material Editor.

Rotates a 3D mesh when given its surface position. Note that this graph will transform input surface space data into object vector(space) and export as world vector. 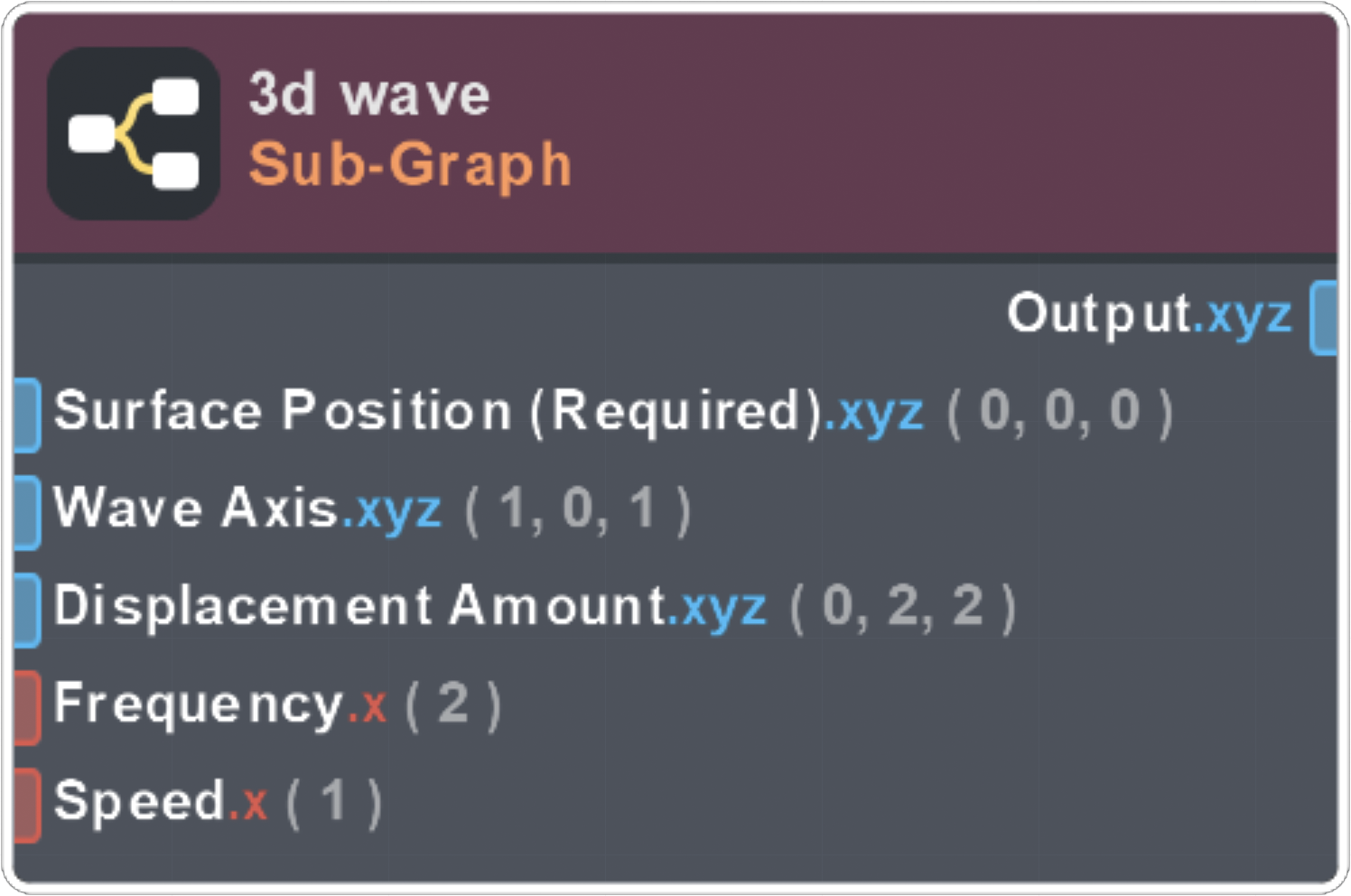 Draws a circular gradient from Color A to Color B in direction given Rotate Degree to the center line. Rotate Degree input can go negative if users adjust the Float Import Min limitation under the Sub-Graph.

Useful for Post Effect graphs. The lower the Resolution, the lesser step you will get. Blur Size offsets the steps, tweak Threshold and Intensity for desired results.

Brightness adjusts the lightness of the overall image, Saturation toggles the intensity of the color, Contrast controls difference in brightness between subjects. Increasing the Contrast value will brighten the light areas and darken the rest.

By giving a desired image/color input, this Sub-Graph keys out Selected Color with Threshold and Slope controls, outputting a black and white mask.

It replaces values from Color to Replace with New Color. Simply plug in Input, and tweak Range and Threshold for better results.

Transition of Color A to Color B along a direction of increasing distance to the center. Creates a diamond shape gradient with controls of offsets and scale. If a non stretched result is preferred, rescale the Scale value according to the resolution.

Post Effect graph, applies directional blur on to an input texture. Angle goes from 0 to 360 degrees.

Post Effect graph, distorts Background Texture with given Noise Texture. Time can be animated by script or just simply plug in an Elapsed Time node.

Post Effect graph, this graph identifies the boundaries of objects within the given texture. Width changes the thickness of the lines. Adjust Contrast and Brightness for fine adjustments.

Post Effect graph, a simple gaussian kernel to reduce image noise and detail. Blur Factor settings can be adjusted to control the blur amount. For this subgraph to work, Pixel Size and TexCoords has to be connected as well as Mipmaps is enabled in the Material setting for this sub-graph to make it work properly.

Tip: You can enable Expose Size Out in the Texture 2D Object Parameter node and connect it to the Gaussian Blur's Pixel Size , as well as TexCoords to Screen UV coords. Take a look at the image below for an example.

Creates a linear gradient transition from Color A to Color B along a line from Point A toPoint B. The bigger the Scale, the shaper the gradient becomes. If a non stretched result is preferred, rescale the Scale value according to the resolution.

Useful for Post Effect graphs, transitions from Inner Color to Outer Color along a direction of increasing distance to the Center Offset point. Inner Radius controls the size of the circle. The lower the Softness value the sharper the results will become. If you prefer a non stretched result, rescale the Scale value according to the resolution.

Useful for Post Effect graphs, this Sub-Graph draws a shape based on given Sides and Softness value. Users can adjust Scale accordingly to match aspect ratio.

If using input values for Sides, note that the step default is set to 1.0, but the minimum value should be 3.0.

This graph will map noise textures without using UV coordinates. It comes in handy when users are working with a mesh that doesn't contain UV information. Outputs black and mask.

Generates a saw waveform. Speed is controlled by an Elapsed Time node inside of the Sub-Graph, setting to 0 will turn off the animation.

This Graph contains both Sine and Cosine calculations. Users can double click on the Sub-Graph node to dive in and simply connect the Output node to Sine or Cosine, the default is set to Sine. Speed is controlled by an Elapsed Time node, setting Speed to 0 will turn off the animation.

Similar to Post Effect Radial Blur, creates a radial blur effect. The closer Inner Radius is to Outer Radius the sharper the result looks. Radial Center controls the offset, the higher the Strength value the more stepped the result becomes.