With Lens Studio’s UI system, you can create custom interactable interfaces to overlay on your Lenses. The UI system contains pre-made UI widgets which can be used in your Lens. Each UI widget comes with a number of settings, such as colors, visual states, and callbacks, which you can modify in the Inspector panel. The following guide walks you through how to add UI to your lenses.

Next, right click Orthographic Camera, and select Import Object. Select the UI_System.lso that you downloaded above. Take a look at the Importing guide for more information.

When you import the UI System, it should contain a UI Panel, instances of the UI widgets, as well as a tap hint animation.

The UI Panel manages touch interactions to the UI system and allows a widget to capture a touch such that the user's touch is not propagated to widgets that are drawn below it.

To add more widgets to your scene, duplicate a widget by right clicking them in the Object panel, and clicking Duplicate.

Tip
Because the UI Panel is a type of UI widget, you can parent UI Panels to other UI Panels. This is useful for creating a popup window containing widgets and you want to prevent widgets below the popup from being activated.

Each widget is a regular object hierarchy containing Screen Transforms and other objects. To modify a widget, edit these objects like you would with any other object.

For example, to resize a widget, select the parent object (the one containing the UI script), and in the Scene panel, you can resize its screen transform.

Like any Screen Transform, you can also set your widget to be positioned relative to the screen across all devices. To do this, select your widget as above, and then give it a fix size for both width and height, then select one of the Pin to Edge options to have that widget be relatively positioned to that edge.

Refer to the Screen Transform guide for more information.

The UI system allows you to set up common UI behavior through the Inspector panel.

Enable Interactable to allow the user to interact with the widget.

Enable Use Colors to have the widget tint its color. The UI system will change its colors depending on its state.

Enable Use Textures to change the widget's texture based on its state.

Enable Edit Animations to modify how you want your widget to transition between each state. You can use prebuilt animations such as Bounce and Squish, as well as defining your own using the Tween System using the Tween option, or modify its transform using the Transform option.

Adding behaviors to your widgets

There are many ways to set up how your Lens will react to a user's action on a widget.

Enable Edit Event Callbacks to add callback behaviors via the Inspector panel. You can have your callbacks be:

Behavior Script  Allows you to define a Behavior script component which will be triggered on the event.

Custom Function Allows you to set a script component and a list of function names. When an event is triggered, it will call the function name as an API. For example: 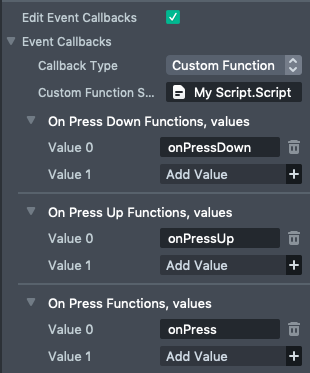 Additionally, you can set up responses using a script.

Each widget has their own set of events related to their function. Take a look at the Available Widgets section below for more information on each widget's custom events.

The UI system also comes with a Tap Hint. This animated image is useful for guiding your user to use your UI system. Simply position it as you would with any Screen Transform.

Warning
Be sure to set up the hint's screen transform such that it continues to point to your widget across different devices. Take a look at the Previewing Your Lens section for more information.

Download this example to see how you can set up an entire UI and functionality without any script!

All UI widgets besides Popup contain:

The UI Panel handles touch input for all UI widgets that it controls.

The UI system comes with two buttons. The first is the standard button which uses additional end cap images to create a rounded button look. In general, we recommend using this button.

However if you'd like to use your own texture, you can start with the simple button instead, as this button does not have any end cap.

The text of the button is set up as a regular object. To change it, select the Background Label object which is found as a child of the Button widget.

The Color Picker provides an interface to visualize and choose a color from a palette. You can choose to use the standard color range, or between two colors of your choosing.

When using your own color gradient, don't forget to change the palette image to match.

You can additionally use the Color Picker as a standard slider, getting a value from 0 to 1.

The UI Toggle triggers events and behaviors when it switches between on and off. It is the direct parent of a UI Button, using the UI Button’s “Press Down” and “Press Up” events to simulate on and off states respectively.