This guide will walk you through playing 3D animations imported into your Lens Studio project. Lens Studio supports the following types of animation:

This guide touches on concepts in the following guides:

To follow this guide, you'll need to set up a Lens Studio project with an imported 3D animated mesh. For more information on how to import a 3D mesh, please refer to the 3D Object Import guide.

For simple animation playback, the Animation Mixer component has an Autoplay checkbox. When enabled, Autoplay will automatically play a looping animation.

Animation playback in Lens Studio can also be controlled by script. The following script can be used in most cases when your scene has an imported animated mesh.

Create an empty Script in the Resources panel.

Copy the PlayAnimation.js code below into the Script you just created:

PlayAnimation.js defines properties that can be customized for your Lens.

This is a reference to the Animation Mixer Component controlling playback of the mesh's animation. All animated meshes imported into Lens Studio automatically have an Animation Mixer. If this property is left undefined in the Inspector, the script will try to use the AnimationMixer on the Scene Object (if one exists). Defaults to None.

A float from 0 to 1 that indicates the blend weight of the current Animation Layer. Defaults to 1. The default value should be used in the majority of cases.

The time offset in seconds at which the animation should start playing. Defaults to 0.

An integer indicating the number of times the animation should loop. A value of -1 will make the animation loop infinitely. Defaults to -1.

Set up the Script Component

Add a Script Component to your imported Scene Object.

On the Script Component you just added, select Add Script.

In the selection dialog that pops up, select the PlayAnimation script you created earlier.

In the Inspector panel you should see the Script Component updated with the properties from the PlayAnimation script.

If you prefer to animate your objects on a single timeline, the Animation Mixer component supports the ability to define clips directly inside of Lens Studio. This allows you specify a start and stop time and name for each clip. When you create an animation clip, it creates a new layer called whatever you named the clip. You can then play the animation layer just like you would an imported animation layer by referencing the layer name in the above PlayAnimation script or in the various Interactive templates. 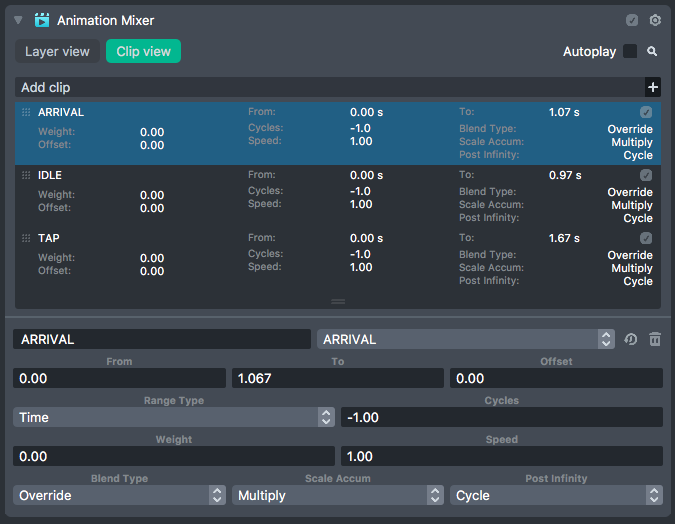 Press the Reset Preview button in the Preview panel to see your 3D mesh play its animation.