Audio Analyzer template allows you to drive different effects based on the power of the audio signal in certain frequency ranges.

Choosing the Audio Source to Analyze

When you first open the template - the project is set up to analyze audio data from an audio track. You can select the Input Audio Track field to change the imported audio to use, or to use the Audio from Microphone instead. 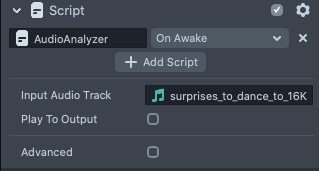 When using Audio from Microphone, you will need to provide access to your microphone. In the bottom of the Preview panel, click the microphone button. Then try making some sound to see the reaction of the scene objects!

Driving Effects based on Audio Analysis

By default the template analyzes audio data and outputs power of signal in 8 frequency bands in the range from 0 to 1.

Tip: The bands (or bins) are defined by splitting the interval from the minimal frequency to the maximum frequency into a certain amount of bins on the mel (logarithmic) scale. This scale is used as it better represents the way the human ear perceives the sound. You can find these advanced settings under the advanced checkbox.

Enable the Screen Images Example [TRY ME] scene object in the Objects panel to see their simple visual representation.

You can expand the object to see that each bar is just an image with a script attached.

Select one of the images, and in the Inspector panel you will find the ScreenTransformExample script. Here you can customize how the selected image changes based on the audio.

In the same way you will see the other objects in the scene have similar patterns.

For example ScaleExample script attached to the diamond1 sceneObject, like before, allows you to set the frequency band index (from 0 to 7), and a scale multiplier along each axis.

Each script is made in the Visual Script editor. You can use these scripts as helpers anywhere in your scene or customize what each script does by opening them. In the Inspector panel, open the Scripts > Script Graphs folder, and double click any of the scripts.

Next, let's take a look at how these scripts work so we can create our custom response.

We can first take a look at the ScaleExample script to see an example. Each graph is annotated to help you see how it works.

You can see that we have a section that takes the current band Value and applies it to find current local scale of the transform by interpolating between min and max scale values :

You can swap the setLocalScale to a different node to fit your needs. For example, to set the position of an object instead:

You’ll notice that this section relies on getting a band value. You will find a section that gets the band value from a custom script and lerps (interpolate)  between the current value and the next value.

You’ll notice in the example scripts we have the GetBandByIndex node to get the value of a band. The result values from audio analyzer can be referenced in a Script Graph with the help of the Custom Script nodes:

Simply drag them into a Script Graph editor and connect execution input to the update event.

Take a look at the different script graphs provided in the template to see different examples of this in action.