ASL Fingerspelling template allows to detect and translate American Sign Language alphabet letters or numbers. This template is built on top of 2D hand tracking technology in combination with SnapML.

The template comes up with three script examples that show how to use API for different experiences.

Tip: The model used in this template is actually provided by SignAll! This template is a great example of how developers can use SnapML to deploy their machine learning models to add new unique capabilities for distribution across Snapchat!

The Fingerspell Detector uses an ML model to predict probabilities of the gestures. The ML model takes 2D Hand Tracking joint positions as an input.

When a new character is detected, this script will call the script.api.onNewChar function on itself.

Fingerspell Hint allows users to visualize letters of the English Alphabet by playing the gesture animation and displaying text on the screen.

Tip: The template comes with a specific 3D model of hand with animation for each letter of the alphabet.

The template comes with three examples to demonstrate how you can use the Fingerspell Detector to create an interactive experience. Take a closer look at the scripts in the Scripts/Examples folder for more information.

Allows you to detect a sign gesture and display it on the screen.

Prompts user to repeat gestures of the characters from a specified word or combination one-by-one. The script displays the next character once the previous was detected. Finally, a custom behavior trigger is called once every character has been detected.

To set a word or word combination to spell, select a Text to Spell [EDIT_ME] scene object and edit text input of the Text Component in the Inspector panel:

Note: Reference to this Behavior is used by Particles Scene Object

Take a look at the Behavior guide to learn more.

Allows the user to display the letter the user signed with their hand and adds it to the Text component. 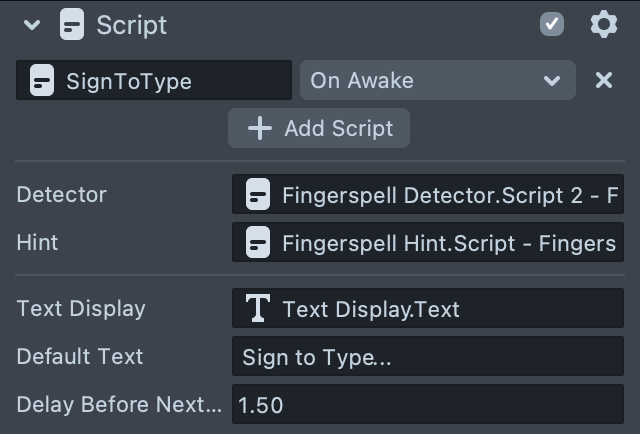