The Behavior Template demonstrates how you can use Behavior script to create an interactive Lens without writing code. It comes with several examples, including how to change an image on tap, start particles based on your facial expression, running Tweens, and even calling your own custom code.

The Behavior template itself is composed of Helpers that can be added individually to your project. Take a look at each of their own documentation to learn more!

The template comes with examples for how you can create different experiences using Behavior. Select each children of Behavior Examples in the Objects panel, then see its properties in the Inspector panel to learn about each one.

Tip: You can add the Behavior script into your project by selecting the + button in the Objects or Resources panel, and choosing Behavior.

This example shows how you can use Behavior to display a hint. There are two Behaviors:

Tip: Behavior is just a script that can be added to any object like any other script. Select the object, then in the Inspector panel, choose Add Component, then Script. Then select Add Script and choose Behavior.

In the first example, the hint is faded in using the Tween system. When working with Behavior or other components with references, a quick way to see how it works is to right click a field with a reference and choose Select in the popup menu. For example, right click the Target Object field containing Tap Hint, and choose Select.

Lens Studio will automatically choose the referenced object. We'll input an object with Tween Script attached into the Target Object slot. Make sure the Tween Script on the target object has the same name as the Tween Name in this Behavior script.

In this example, you can see how multiple Behavior scripts can be linked together to create more interactive experiences, even a list of them!

The main Behavior in this example is the one found on the On Tap: Change sticker object. This Behavior responds to Tap Events by calling other Behavior scripts. To communicate with other scripts, this Behavior uses the Send Custom Trigger option.

In addition, the Next In List option is selected so that every time this response is called, the next Custom Trigger in the list is triggered. This is what allows every tap to modify, enable or disable a different object.

The response for each Custom Trigger is set in the child objects. In each child object you can see two behavior scripts (similar to the previous example)--both responding to the same custom trigger listed in On Tap: Change Sticker Object. One changes the texture of the logo, and the other animates the logo using tween.

Thus, every time the user taps on the screen, the logo’s texture is changed as well as a bounce animation is played.

Tip: It is not important that they are set as a child object, as Custom Triggers function globally. In fact, you can have multiple Behavior respond to the same Custom Trigger, and arrange them anywhere in the scene.

The On Tap: Show Ring example is very similar to the On Tap: Change Sticker example. The main difference here is that instead of changing the texture of an Image Component, it is setting a parameter for a material. Try using what you learned in the previous example to play with this example. 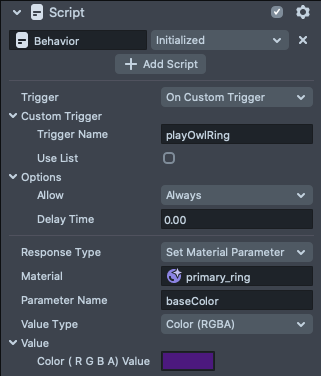 This example shows how you can use multiple Behaviors to modify how interactivity should work based on the users action.

In this case, you may want a user to show a hint to switch their camera if they haven’t yet swapped it yet. So there are two objects--each one to show a hint for each side of the camera.

In addition, there is a second behavior script in each hint that disables that object if the corresponding camera has already been triggered. When an object containing Behavior is disabled, the Behavior itself will no longer run.

Tip: This is a double edged sword as you may accidentally disable an interactivity without taking this into account.

For example, if you wanted an object to appear and disappear when a head is in the scene, you should NOT put the object as part of the appearing/disappearing object, as when the object disappears, so will the Behavior to bring it back.

Each object under Face Interactions is an example of how you can connect your own script with Behavior. This is useful as Behavior can take care of some of the common Lens Studio specific code, while you can focus on the specific logic of the interactivity you want.

For example, in the On Tap: Swap through face objects, we wrote a script that enables only one object in a list, and disables everything else. Then, we exposed this function through the api property. Finally, we called this script using Behavior by using the name of that function.

Warning: make sure the Function Name input field on Behavior needs to be an exact match of the API function in the custom script!

Tip: Using this technique you can quickly change how you want your interactivity to be triggered as well. Changing between tap and face triggers is as quick as choosing from a drop down. This allows you to develop your AR experience much faster and iterate by tests!

This example is similar to the previous. Try taking what you’ve learned previously and playing with this example!

This example demonstrates another way you might want to use Behavior. In this case, the Behavior deals with the helper parts of your Lens so you can focus on your own Interactivity:

The last example contains interactivity that you might want to do in a Lens facing the world side.

Tip: The world side objects are using the World Object Controller which will disable any child object if you are in the front facing camera, and enable it when it’s facing the rear

On Tap: Swap through world objects

Like On Tap: Swap through face objects this example demonstrates a Behavior interfacing with a custom script.

On Look At: Change Owl animation

Demonstrates the usage of two behavior scripts to modify the animation of a 3D object--the first when a user is looking at, and the second when the user is not looking at an object.

This example is similar to the previous example. However, in addition, it responds to one of the animations that’s played by playing another example when it ends!