To create your own Full Body Trigger Lens you will need:

When working with this Template, you’ll want to switch the preview video to one with a person’s body. In the Preview panel, select the Image / Video Mode button.

Then, in the drop down at the top of the Preview panel, choose the Dance or the Skeletal preview video.

Tip: Record your own videos or make photos and set them as a lens studio preview by clicking on + From Files button at the bottom of the preview panel dropdown list.

The Full Body Tracking provides 2D screen points that represent user’s joints / parts of the body. It is the basis of this template.

You can find all the joint objects under Full Body Tracking Controller and on the FullBodyTrackingController script under Advanced section.

To attach mesh or images to a certain joint, just put the object as their child or use Pin to Mesh to connect them to the joint. In this template we have attached simple 2D colored dots.

You can preview how joints are tracked by turning on the joint debug view. To do this go to JointDebugHelper under the Helper Scripts [EDIT_ME] object and check Show Debug Joints.

You can add a custom pose to the GestureController script by tapping the screen at a certain time, it will print out the relative position of the joints at the time of the tapping.

Then you can copy the printed message and paste it into the GestureLibrary script and create your own pose!

Tip: You can also remove some of the values (name and value) provided by the logger message if those joints don’t matter for your pose.

Note: In this case Touch Screen Trigger is related to the body’s joint “touching” the screen transform area based on the camera video, not touching the device screen. To learn more about screen touches on device, check out this guide.

In this mode you’ll input a ScreenTransform as the trigger area and select a joint from the drop list, then the script will check the distance between the joint and the screen trigger. It will send out Start Trigger and Complete Trigger if distance is smaller than the Threshold value.

Because screen trigger is instantaneous in comparison to gesture trigger, the effect here often checks Has End Time and is given an Effect Length.

Distance Check checks the distance between two joints and compares it against the Threshold, and sends out Start Trigger and Complete Trigger if distance is smaller than the Threshold.

Different from Distance Check in MovementTrigger, Distance Modifier takes the distance between Main Joint and Target Joint or Target Object with a screen transform component and uses the distance to change a given Parameter on a material.

In the case of the example, the distance between left and right wrists is modifying a pixelated full screen effect.

Under each object in Effect Trigger Examples, there is a Response object with a MovementTriggerResponse script. 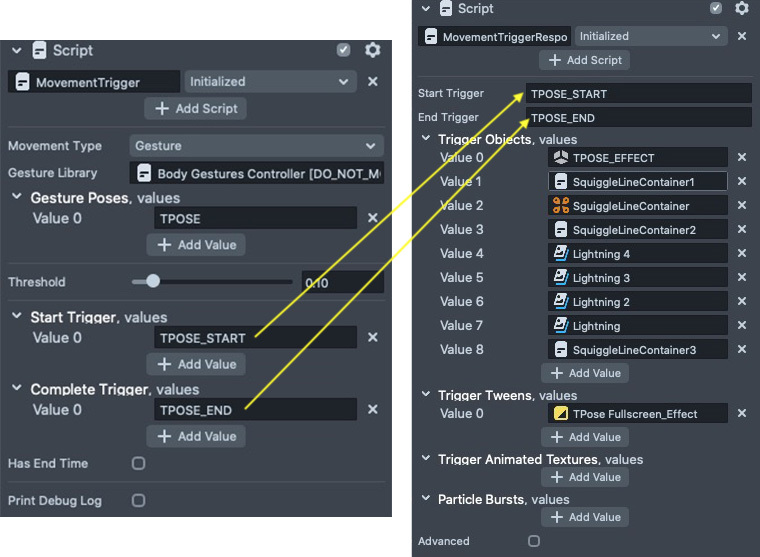 In the MovementTriggerResponse script, there are four different response types:

You can also respond to Movement Triggers by using Behavior scripts. For example, on the FootClick_Response_Behavior object, all animations and fullscreen effects are triggered with Behavior scripts.

Each Behavior script is set to run on a custom trigger with the trigger name corresponding to the triggers in MovementTrigger.

The advantage of using Behavior scripts is having a very wide range selection of responses and having delays to the trigger as well.