The Spectacles Depth Template allows you to dynamically generate objects in the world space and check whether the object has collided with a surface. It additionally allows you to trigger behaviors when the object spawns, when it collides, and when its lifecycle ends.

This template is driven by the Object Spawner object which contains the ObjectSpawner script. This object will spawn its children over the course of the Lens, duplicating its children as needed, and reusing old ones as they finish their lifecycle.

To spawn your object, select the object you would like to spawn, and drag it under the ObjectSpawner.

Next, we can modify how the spawned objects behaves. To do this, select the Object Spawner [EDIT ME] object in the Objects panel, then, with the object selected, we can configure its settings in the Inspector panel.

Modify the Count property to specify how many objects will spawn during the Spectacles video loop.

Set object Lifetime to set a spawned object’s lifetime in seconds (use -1 if you want the objects to stay alive to the end of the video/photo loop).

Set the Collision checkbox if you want the object to react to surfaces in the video. This option uses the depth information stored in a Spectacles 3 video. Take a look at Lenses for Spectacles for more information.

Set the lifetimeAfterCollision parameter to define how many seconds the spawned objects will stay alive after collision (0: disappear right after collision, -1: stay alive until the end of the video/photo loop).

You can additionally adjust the spawn position relative to the Spawn Source by modifying the Offset parameters.

You can modify the size of the cube by setting the Spawn Box Size.

Finally, if you enable the Apply Rotation checkbox, the spawned objects will be rotated towards the camera when they are spawned.

If you want objects to always look at camera simply add a LookAt Component to the original object.

Once your objects are spawned, you can have them move like a simple projectile by enabling the Move checkbox.

The Start Speed parameter allows you to set the object's movement speed relative to the spawn source. For example, if you set the Camera object as a Spawn Source and set Start Speed to (0, 0, -200), the spawned objects will fly away from the Camera at 200 units a second.

The World Force parameter adds additional acceleration to the spawned objects. It is world-oriented. For example, if you want to simulate gravity simply set the World Force 's y value to -100.

If the Stop on Collide checkbox is enabled, the spawned object's positions will not update after the moment they reach the Spectacles depth. This is helpful for having an object stick to a surface, rather than go through it.

You can set up some behavior to occur throughout the object's lifecycle: when the object is spawned, when it has collided, and when it is recycled at the end of the object’s lifetime.

To do this, add a script to the object under the Object Spawner object and expose your callback function as an API.

This project has several example helper scripts that utilize the spawned object callbacks above to help add  some basic behaviors to your spawned objects.

External time checkbox should be enabled on the particle material.

Play2DAnimation - Plays a 2D animation on a baseTexture of a specified Mesh Visual.

Without this material clone, you can see below that every time an object collides, all the animated textures in other objects are played as well.

By enabling Clone Material, you will be able to link an Animated Material Duplication Helper which will allow you to have each spawned object's animated texture play separately.

The Animated Material Duplication Helper has an array of animated texture duplicates, and a material to clone as an input. For each texture, the script will clone the material and apply the texture to it.

If you need your own helper, you can write your own script based on ExampleHelper[EDIT_ME] script or by using TriggerBehaviorScript to trigger a Behavior.

For example, if you wanted to run a tween when an object is spawned, you can create a behavior that plays a tween. 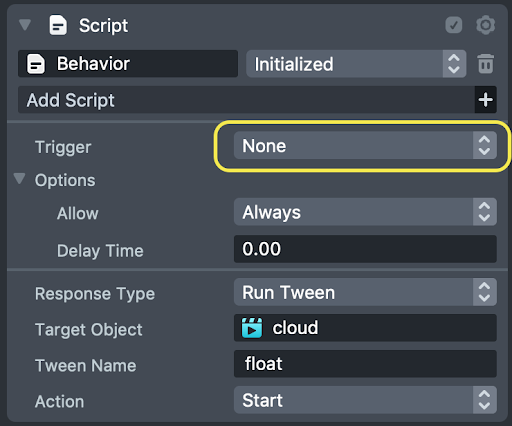 Then, in the spawned object, add a TriggerBehaviorScript script, and add the Behavior script component to the list of values.

Note
There’s no need to set Trigger type on the Behavior script, it will be triggered directly by TriggerBehaviorScript

Lastly, the template includes a DepthSetter Component, which uses the depth information from the Spectacles recording to occlude your 3D scene when it is behind a surface or a real objects in the video. You can enable or disable this feature by enabling or disabling the DepthSetter component on the Camera object.